Thank you for your patience while we retrieve your images.

Some places just look better photographed in black & white. And Denali the "High One" is one of those places.

Wonder Lake was made famous by a back & white image by Ansel Adams.

Looking for his tripod holes, I made the pilgrimage to the very spot where Ansel Adams shot the image.


Photo #4 in the gallery is a black & white image I made on 2013 and is compared with Photo #5, which was made by Ansel Adams in 1946. The trees along the shoreline have gotten bigger but not much else had changed. 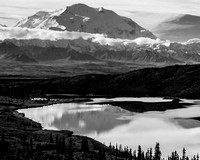 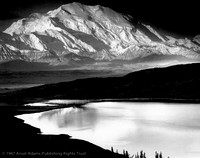