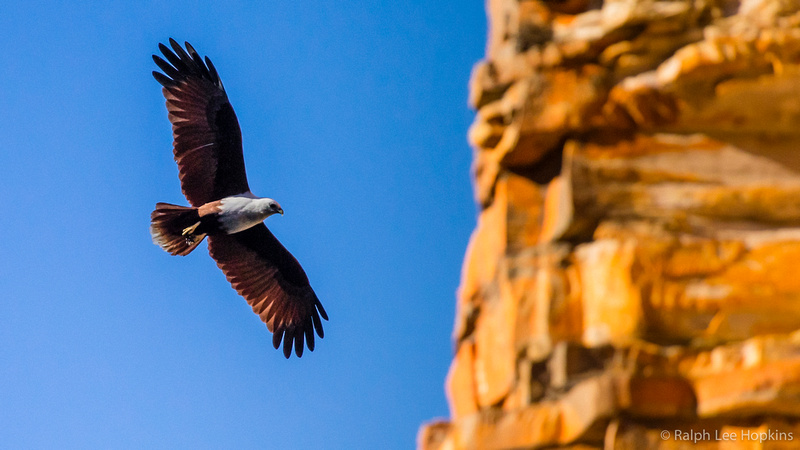 Imagine a coastline with cliffs of red sandstone rising above an azure sea. A white-bellied sea eagle circles overhead then swoops down, landing on its nest perched high on a cliff. Imagine a land so remote that indigienous people still roam the canyons and fish its shores. They are the guardians of rock art panels scattered far and wide across the region, some dating back more than 40,000 years, others possibly as old as 100,000 years. These enigmatic paintings of red ochre are carefully hidden under overhangs, protected by a case hardening of silica weathered from the ancient layers of stone. Like Tapestries of Stone, their origins are still being debated today. Each rock art panel is a masterpiece onto itself, and worthy of careful study and deep contemplation. 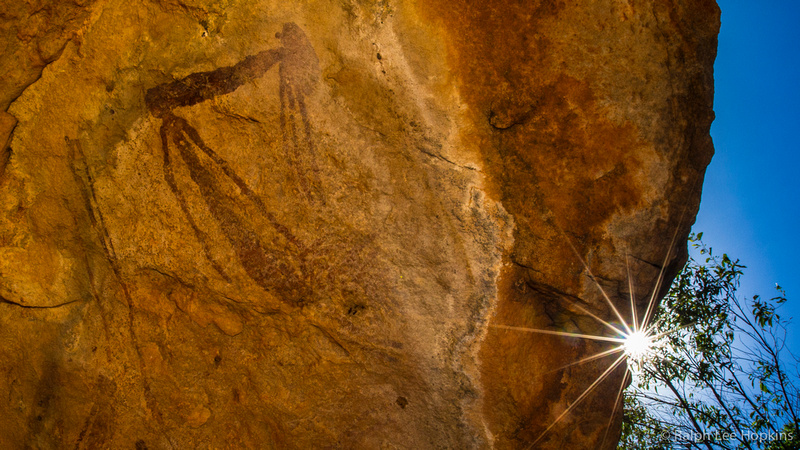 Imagine a land so wild that few Australians have visited its hidden waterfalls and deeply eroded canyons. You're tempted to swim from the perfect sandy beaches but fear crocs may be lurking. Imagine a place so different that it's simply referred to as The Kimberley, and considered by some – Australia's last frontier. 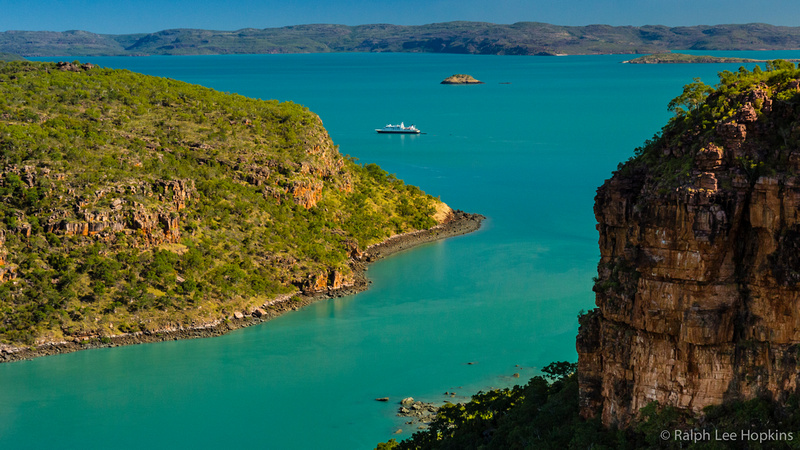 An assignment with Lindblad Expeditions-National Geographic on the National Geographic Orion brought me to this landscape of rock, sea, and sky. We spent timeless days exploring remote canyons and mangrove-lined channels cut deeply into the Kimberley Plateau. Places like Porosus Creek along the Hunter River, where saltwater crocodiles, or "salties," are found basking on mud banks at low tide. Another day found us exploring the rocky shores of Talbot Bay, where mega-tides over 10 meters (30 feet) cause strong tidal currents. Where the seawater rushes though tight passages in the rock formations, dangerous maelstroms form, called the "Horizontal Waterfalls." We also explored the far reaches of the King George River Canyon, where twin 80 meter high waterfalls cascade from the rim, and visited Montgomery Reef, the largest inshore reef complex in Australia. The locations were as diverse as they were spectacular, and each day revealed many surprises, as expedition days often do. 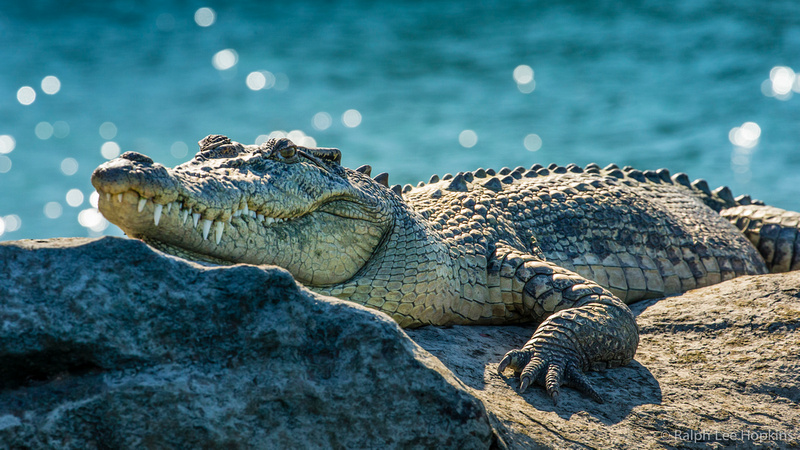 Saltwater Crocodiles are one of the planets oldest predators, with fossils dating back to when dinosaurs roamed the earth almost 100 million years ago.

It's a quirk of geologic fate that the ancient Precambrian sandstone formations of the Kimberley Plateau remain undeformed, surviving nearly 2 billion years of turmoil. On the underside of boulders are perfectly preserved ripple marks that appear as if the sand was swept by currents only yesterday. Almost everywhere else on earth, rock layers this old –  including the contorted schist and gneiss in the bottom of Arizona's Grand Canyon – have been heated, folded, twisted and changed beyond recognition from their original form, a process called metamorphism. It boggles the mind that through time this region, known to geologists as the Kimberley Craton, has been a virtual life raft in a sea of turbulent plate tectonics. 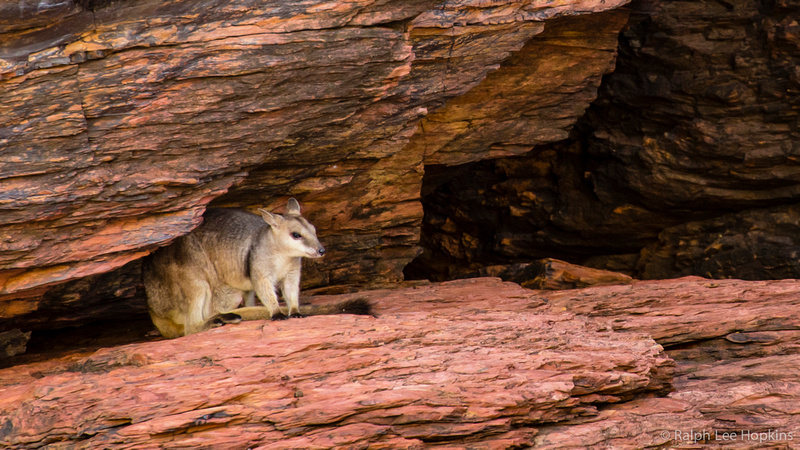 A Rock Wallaby sits motionless under a rock overhang.

The sandstone formations of the Kimberley were deposited 1.8 billion years ago in a shallow marine basin bounded by steep mountain ranges uplifted along active fault zones, where plate tectonic collisions were assembling new continents.  With repeated collisions and rifting events the Kimberley ultimately became attached to the ancient supercontinent Gondwanaland, connected to what would later become Antarctica.  Venture to the margins of the Kimberley Plateau, along the Halls Creek and King Leopold fault and thrust zones, and you'll see firsthand the deformation that occurred along its boundaries during a long, turbulent history.  Exposed in dramatic fashion along the rocky coast, sandstone layers are bent into anticlines and synclines, thrusted upward along faults until the layers are standing on end, and overturned along steep limbs of major geologic structures. 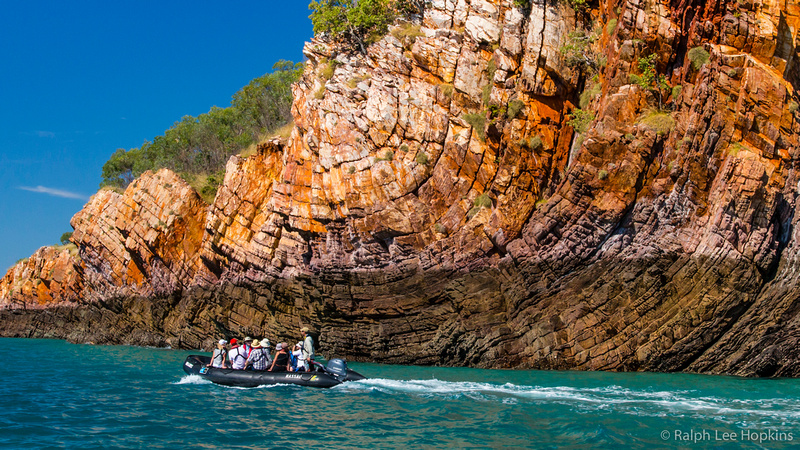 Repeated collisions over time have warped sandstone layers downward into a syncline.

Stained red by the oxidation of iron over the eons, the Warton, Pentacost, King Leopold sandstones have been sculpted by erosion for nearly the past 50 million years since the rifting and separation from Antarctica, creating rocky cliffs, overhangs, and hidden caves that became the stone tapestries for the rock art paintings made long ago. Meanwhile, sand grains are plucked from the rock grain by grain, and washed seaward to become a beach once again, after being locked away in the rocks for almost 2 billion years. 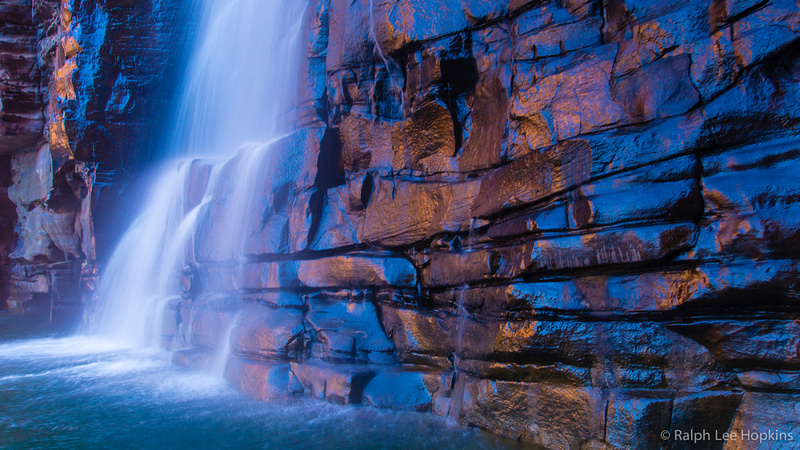 Perhaps the biggest surprise about the Kimberley region are the Aboriginal people who still live here, their impressive and mysterious artwork, and the ongoing importance of wandjina spirits in their dream world. Paintings of extinct megafauna, like the carnivorous marsupial Thylacoleo, point to an ancient civilization that stretched across the Kimberly region, pushed south by the Ice Age, migrating from Africa to Indonesia when sea level was 140 m lower. During this time the coastline was 400 km further to the northwest, making it possible to literally walk to Australia from Indonesia and Papua New Guinea. Not coincidentally, a single species of boab tree (Andonsonia gregorii) came along with them, its stock linked to a common ancestor in Africa. The geographic distribution of boab trees overlaps almost perfectly with known rock art locations. Rich in vitamin C, the trees have many medicinal properties and uses in daily life, and the nutritious fruit lasts more than a year, making it perfect for travel. 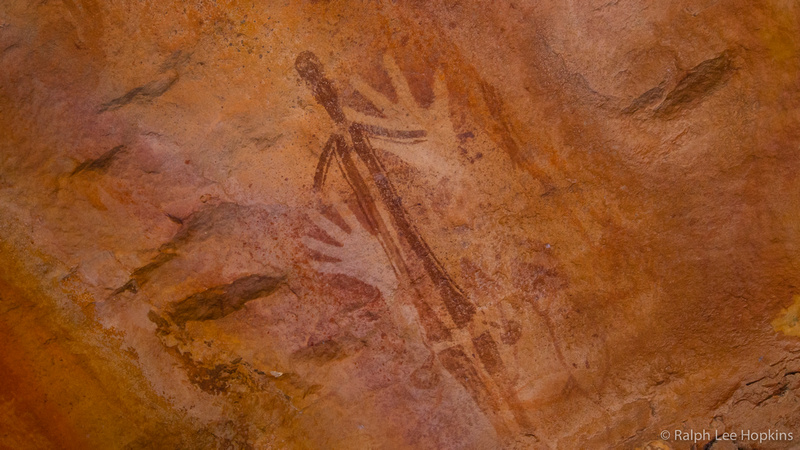 Protecting camera gear is crucial in a splashy and sandy environment like the Kimberley. I used a 1510 Pelican case for the long Zodiac forays, and a Gura bag with rain cover for hikes to the top of the waterfalls. My gear included two DSLR camera bodies and a range of lenses, from 16-35mm, 24-105mm, and 70-300mm. Although there were times I wish I had longer glass, for birds for example, the freedom of the 70-300 is the perfect lens for shooting from a moving Zodiac. Harsh light and a general lack of clouds made for challenging shooting conditions. Indeed, some of the best compositions were found in the shade, where reflected light added another dimension to the already rich colors. I often shot with a high ISO (800 and above) to help stop the motion of the moving boat when shooting in low light. 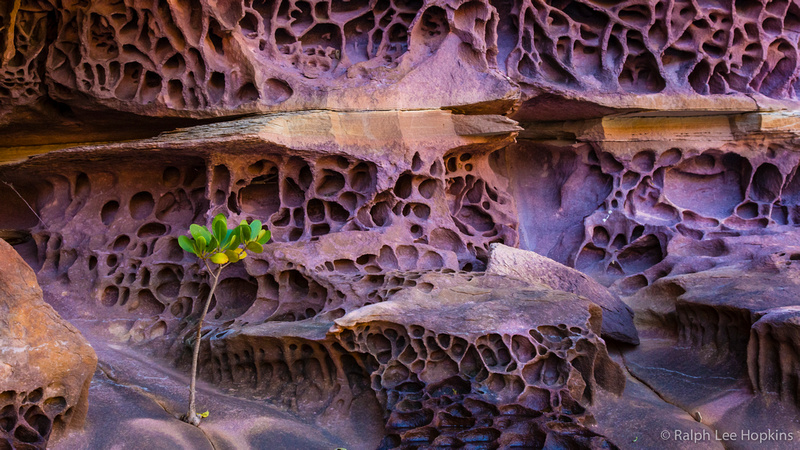 Red mangrove seedling takes hold in a rock crevice against a backdrop of honeycomb weathering.

The month-long assignment was capped off by a thrilling "doors-off" helicopter ride to Mitchell Falls and overflight of the ship underway, with the Zodiacs exploring a literal maze of mangrove channels. I used a 24-105mm image-stabilized lens and cranked up the ISO to keep shutter speeds over 1/1000 second. Being the newest ship in the Lindblad-National Geographic fleet, it was important for the assignment to capture the National Geographic Orion from the air, in it's true expedition mode juxtaposed against blue-green water and colorful sandstone cliffs. 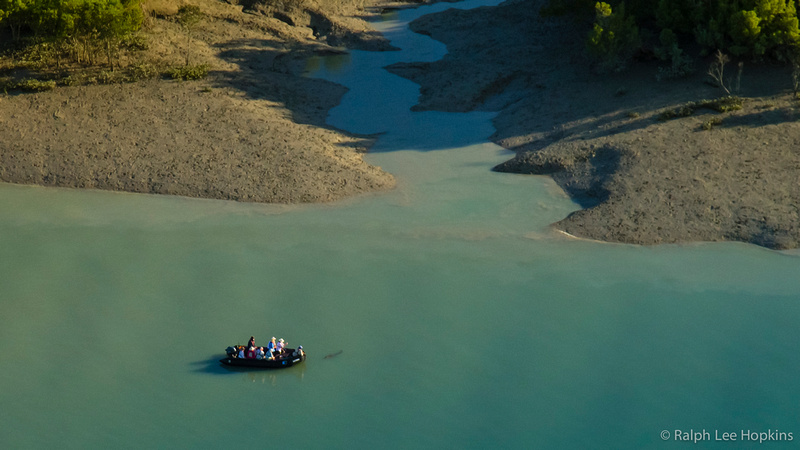 Aerial photo of a Zodiac being approached by a salt water crocodile.

Flying back across the Pacific Ocean to North America, the last month now seems like a dream. With my eyes closed the rock art comes alive with visions of dance, ceremony, and ritual. Perhaps it's no coincidence along these rocky shores exists the largest population of Humpback Whales, who return from their feeding waters in Antarctic to mate and give birth.  If the land is this rich with rock art above today's sea level, then think what it must have been like during glacial times, when stone canyons reached like fingers to the coast. Imagine the secrets hidden from view beneath the sea. Imagine the Kimberley.