Quest for the Northwest Passage – Dispatch from the Canadian Arctic 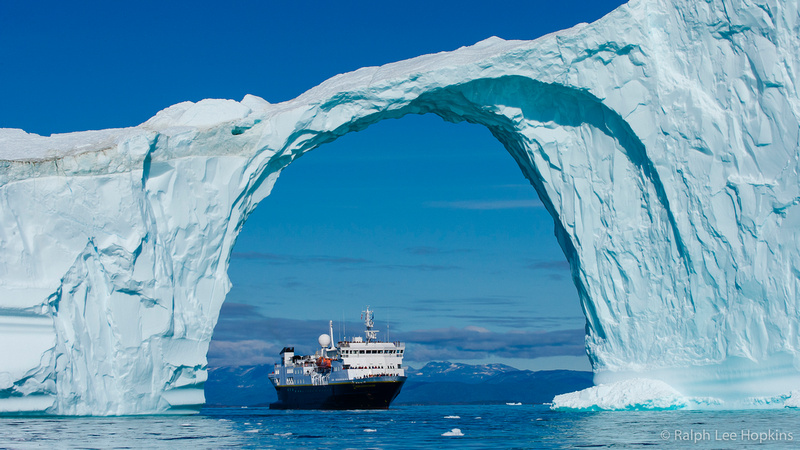 Quest for the Northwest Passage – Dispatch from the Canadian Arctic

The mark of a true expedition is uncertainty. And in the Canadian High Arctic, any attempt to transit the Northwest Passage by ship is one of the most uncertain expeditions of all. Wind, weather, and ice conditions determine the exact course of any voyage through the Canadian Archipelago in the far north. These are the same treacherous straits and channels that foiled many historic expeditions, where dense, multi-year pack ice is jammed together making navigation difficult, if not impossible for wooden sailing ships back in the day.

Today, with climate change and shrinking ice conditions, the odds of transiting the Northwest Passage are better, but success is not guaranteed, even for a modern expedition ship with satellite-generated ice charts and forward scanning sonar. It is the ice that rules this world, and the reason we are here – to experience the frozen world of the Canadian High Arctic.

Heading north in Davis Strait toward Baffin Bay and Lancaster Sound at the entrance to the Northwest Passage, the National Geographic Explorer is framed perfectly through a giant ice arch along the west coast of Greenland.

For this assignment on board the National Geographic Explorer, I’m outfitted with state-of-the-art Canon digital cameras from B&H PhotoVideo in New York, including two bodies ( Canon EOS 1DX and 5D MKIII), and an arsenal of L-series lenses from wide-angle (16-35mm, 24-105,mm) to medium and long telephoto zooms (70-300mm, 200-400 with its 1.4 extender built-in), and also the 100mm macro. For ultra-wide work, I’ve brought along a 14mm aspherical lens and 15mm fisheye. Add to this a monopod and tripod, Canon Powershot G12, and the GoPro 3+, and I’m ready for almost any situation. Bring on the ice…

These immortal lyrics play over and over in my mind as the National Geographic Explorer navigates through the pack ice. Ahead of us, the Canadian Icebreaker, Pierre Radisson, cuts a swath for us to follow. It’s exhilarating to see what 13,000 horsepower can do in the ice, and thrilling to watch (and feel) us navigate in its wake. The quest for the Northwest Passage across through the Canadian Arctic archipelago eluded explorers for centuries. Names on the chart read like a who’s who in polar exploration, Franklin Strait, Larsen Sound, and the Parry Channel. Numerous expeditions were forced to over-winter, and some disappeared altogether – the most famous being the 1847-48 Franklin Expedition. Roald Amundsen was the first to successfully navigate the Northwest Passage in1903-1906. But it wasn’t until 1984 that the famous Lindblad Explorer (the world’s original expedition ship no longer afloat) became the first expedition ship to make the transit all the way to Barrow, Alaska.

Back in the moment, the National Geographic Explorer successfully navigates the swift currents and maelstroms of Belloit Strait. Tensions run high as we begin to encounter multi-year ice in Franklin Strait. Looking down from the bow, the ice is getting noticeably thicker with jumbled pressure ridges meters high. Ahead of us the icebreaker abruptly comes to a complete stop only a few ship lengths from our bow. With the pack ice quickly closing in, the National Geographic Explorer also comes to a halt.

The photographers among us brave the elements on deck to capture the close approaches of the icebreaker.  Skilled maneuvering gets us going again, but we have now reversed our route. At this rate, the passage would take many days to complete, if at all. A decision is made to shift to Plan B, and instead explore north toward Ellesmere Island. Veteran travelers understand that good things happen when plans change. 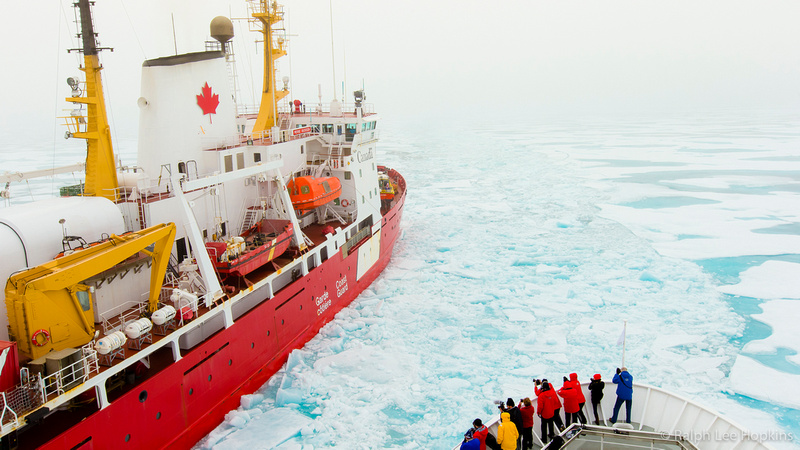 It’s a strange feeling to sit motionless in the thick pack ice. One can only imagine what it must have been like for Sir John Franklin and his men on board Erebus and Terror, the ships beset in the ice in 1847-48, a situation that ultimately took the lives of 128 men.

In stark contrast, we enjoy hot soup at lunch in the warm confines of the National Geographic Explorer, flagship of the Lindblad Expeditions-National Geographic fleet. As perhaps the best expedition ship afloat for exploring the remote corners of our world, the ship’s ice-strengthened hull and bulbous bow can navigate through thick pack ice and past towering icebergs. It’s a very comfortable, if not luxurious, platform to experience and photograph the icy wilderness of the High Arctic.

The National Geographic Explorer sits motionless in the ice, her engines off, as we rest after a long day navigating in the pack ice. For the first time since coming on board over a month ago, the ship is silent. It happened just before midnight – a young male polar bear approaches the ship’s bow. In a complete state of awe, a handful of us gaze down from the bow as the curious ice bear investigates the strange object that has entered its world. Not many ships travel these waters, so there’s a good chance we’re the first ship this bear has ever seen. As if in slow motion, this top predator of the Arctic walks the length of the ship past the stern, then jumps between ice floes and disappears back into its white world. 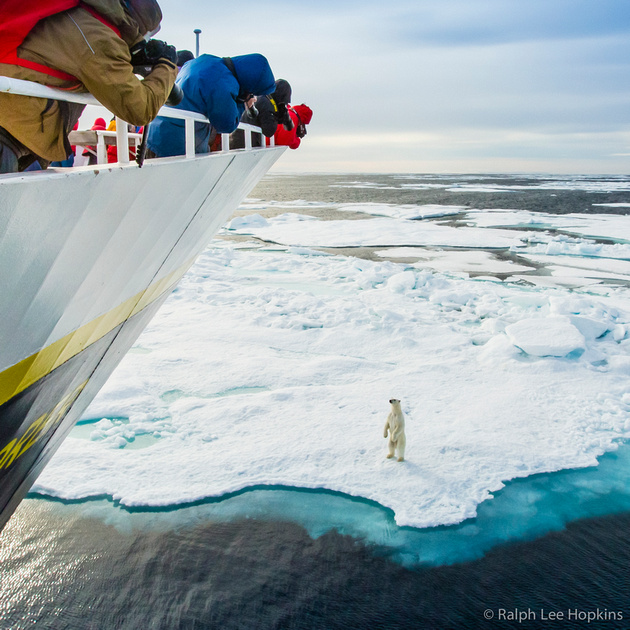 There’s a strange attraction to being in the pack ice, looking out over vast expanses of frozen ocean with hope of discovering a polar bear in its natural habitat. It’s called “Polar Fever.” And I’ve got it bad, traveling to the polar region year after year. In a melting world each and every polar bear sighting is especially meaningful. Like ours, their world is rapidly changing.

In expedition travel there’s always something new to see or discover. For the first time in my 25 years in the far north, we are treated to a brilliant display of the Northern Lights (Aurora Borealis). Although always a possibility late in the season (when it starts getting dark), seeing the Aurora is a rare treat. The bright dancing lights seen above the magnetic poles are created from collisions between electrically charged particles from the sun as they enter the earth’s atmosphere. Reportedly, solar pulses from the sun this fall are extremely strong, painting the sky a neon green reflecting in an amazingly calm ocean. Photographing the Northern Lights from a moving ship is no easy task, and possible only since the advent of high ISO settings on modern digital cameras. So what should my settings be? Being one of the lowest noise cameras on the market, I cranked my Canon 5DMKIII up to ISO 3200. Workable shutter speeds, around 1-3 seconds, were attained by using a wide-angle 16-35mm/f2.8 lens. The calm sea conditions also permitted the use of a tripod, something I would not normally try on a moving ship. For some shots, I simply braced the camera on the ship’s rail using a neck-rest, something I always travel with. And finally, since autofocus does not work effectively in the dark, I manually pre-focused to infinity and locked focus with gaffer’s tape. 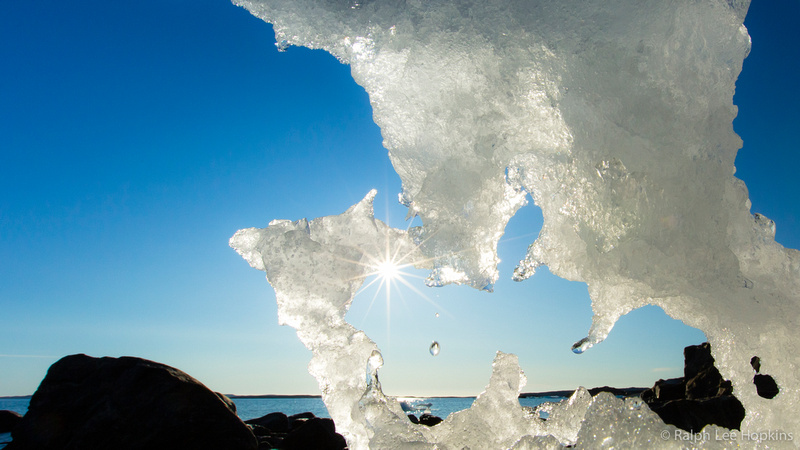 Homeward bound and looking down from 35,000 feet on the Canadian landscape and recounting all the sightings and experiences, I realize the memories from the past 6 weeks will last a lifetime. Although we never did make it through the point of no return, the quest to transit the Northwest Passage has been a true expedition in every sense of the word – from the pack ice and Canadian Icebreaker, to polar bears and walrus, and the aurora borealis. There were surprises, and some disappointments. In the Arctic, as in life, you can make a plan but you can’t plan the results. Stay true to the moment and great things will happen. Bring on the ice…