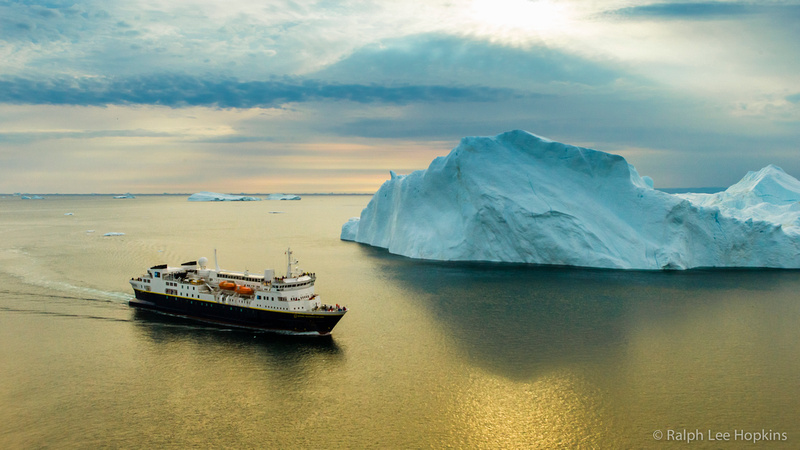 Arctic Quest, a voyage exploring the High Arctic on board the National Geographic Explorer with Lindblad Expeditions. We departed Reykjavik, Iceland on July 22, 2013, sailed across the Denmark Strait to southern Greenland, north along the coast to Ilulissat, then across the Davis Strait to Baffin Island and Devon Island in the far north. When traveling I'm always on assignment to photograph the day-to-day expedition and also the ship set against the arctic landscape. Taking advantage of unusual calm weather and favorable ice conditions at Disko Bay, we chartered flight-seeing planes and also a helicopter to shoot aerial photos of the Explorer as she navigated the pack ice.

Check out this short video by Jim Napoli

When you look at a globe of our planet, the Arctic Ocean appears as a vast expanse of mostly frozen seawater. This ice-choked ocean of icebergs and pack-ice is surrounded on all sides by a landscape of glacially-carved bays and fjords, cut by just a few significant passages, each of which are critical for the circulation of ocean currents. The landscape is mostly frost-shattered rock and boggy tundra, with trees only inches tall, and carpets of miniature wildflowers that bloom for only a short time in summer under the ephemeral warmth of the midnight sun. 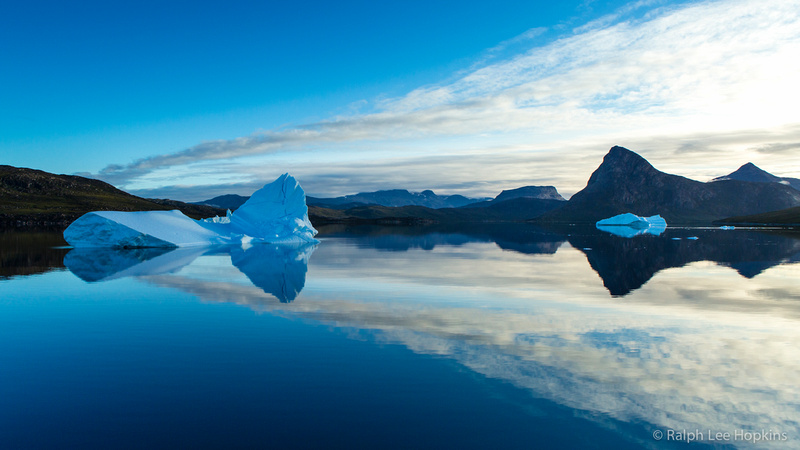 Standing out like a small continent in the high arctic is Greenland, the world’s largest island. More than 80% of Greenland is covered by a rapidly melting icecap, the second largest accumulation of ice after Antarctica. To the west across Baffin Bay and the Davis Strait is Baffin Island, with its dramatic fjords geologically similar to Greenland separated by plate tectonics during the opening of the North Atlantic Ocean over the past 140 million years. 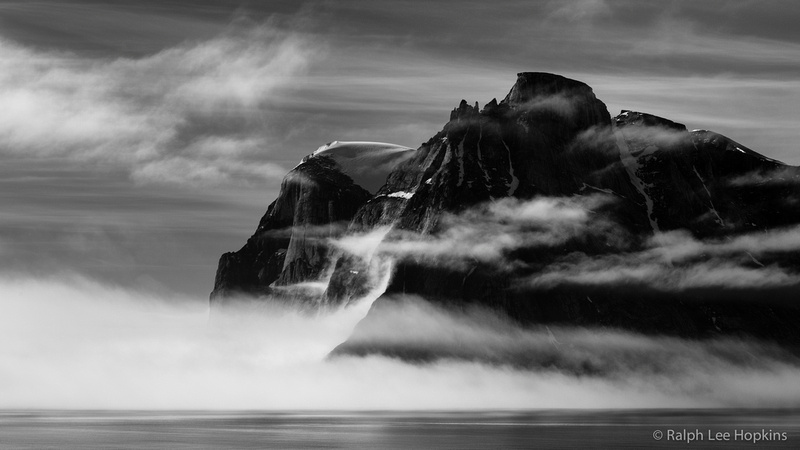 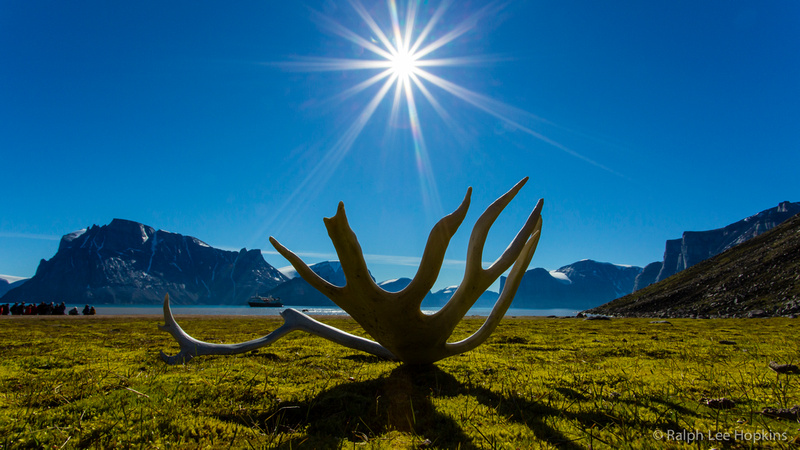 The ice fjord of Illulissat, a UNESCO World Heritage site, is where the world’s fastest moving glacier, Jakobshaven, is calving the greatest amount of ice anywhere on earth. If you’ve seen the documentary Chasing Ice by National Geographic photographer James Balog, this was the glacier captured on film calving an iceberg the size of Manhattan. Mountains and castles of ice on a scale seen only in the Antarctic, are stranded along the end moraine at the entrance to the fjord, each berg a unique sculpture and work of art. Amazingly, the icebergs are more than 40 miles from the glacier face. 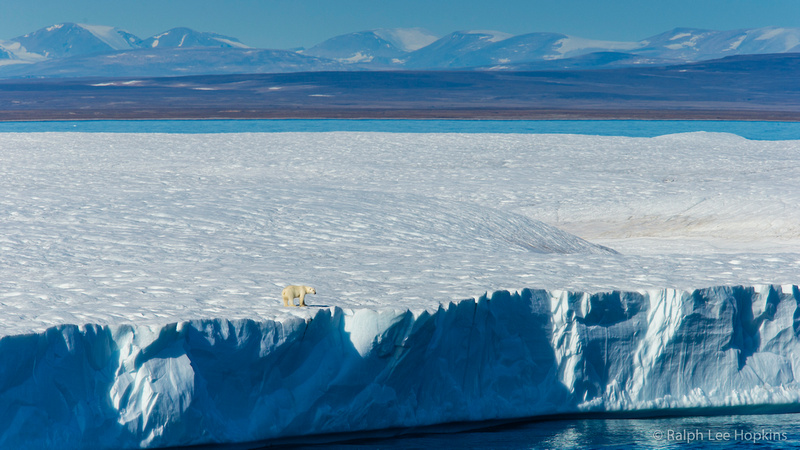 Perhaps the biggest surprise of the trip was exploring the east coast of Baffin Island, the worlds 5th largest island. Exploring new territory we encountered a number of curious polar bears or Ice Bears – symbol of the arctic. Our polar bear encounters could not have been more diverse, with all kinds of behavior including several that approached the ship. There were pure white bears, yellow bears, young bears, all appearing very fat and healthy. 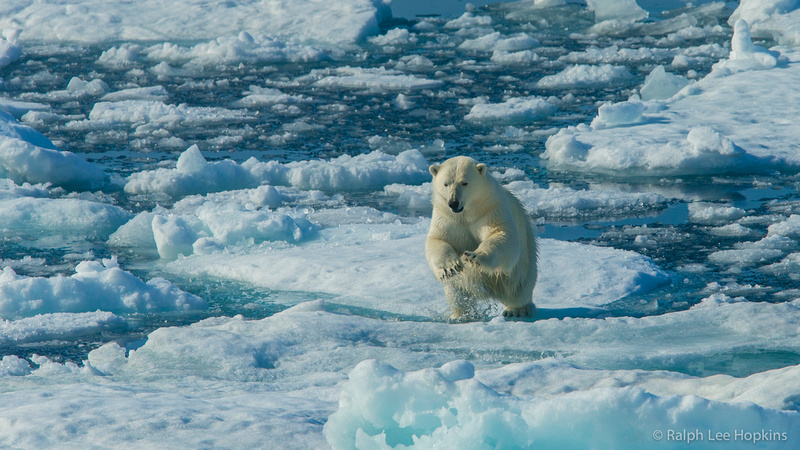 We also encountered whales, including the mythical narwhals. We also encountered with more than a dozen endangered bowhead whales that, at one point, surrounded the ship. Bowheads are a true arctic species hunted by man for more than a thousand years, from the highly-skilled Thule culture followed by the Inuit people and later the Vikings. The advent of the harpoon gun employed by European whalers almost drove these gigantic cetaceans to extinction, driving numbers into the 100s. Bowheads can reach more than 65 feet in length, approaching 100 tons in girth, and yielded 30 tons of oil per animal, highly lucrative in its day. Thankfully, with protection, these whales are making a comeback, with latest census numbers yielding more than 20,000 animals. We can only hope the trend continues. 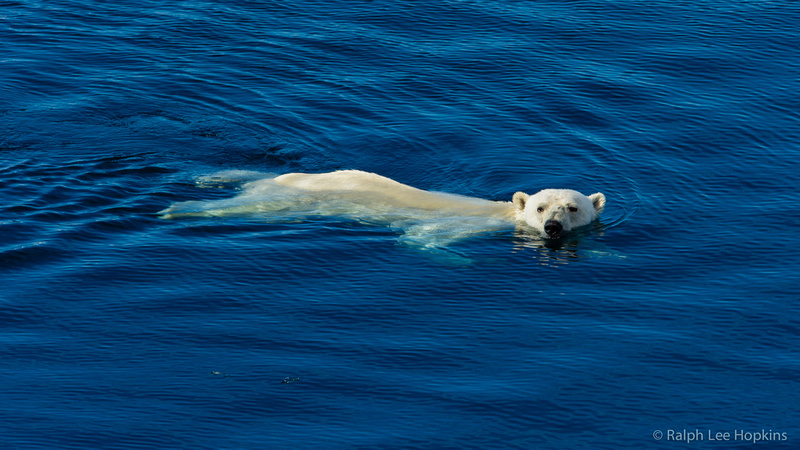 All of us on board the National Geographic Explorer – from the ship’s officers, crew, expedition staff, and seasoned travelers – agreed that this was one of the most spectacular, and meaningful, voyages in recent memory. An experience highlighted by the young male polar bear that swam directly across our bow, looking each one of us in the eye. We could see his front paws paddling through the crystal clear arctic water, as he swam from one ice floe to another, showing no fear, only curiosity about this blue ship with the yellow stripe.

For a timeless moment I experienced a personal connection with the true symbol of the arctic – the Ice Bear – that I will never forget.

The National Geographic Explorer is the flagship of the Lindblad Expeditions-National Geographic fleet and, with it's ice-strengthened hull, is the best expedition ship afloat for exploring the remote corners of our world. The Explorer is a very comfortable, if not luxurious, platform to experience and photograph the wilderness in the high arctic. Experienced Ice Captains navigate tuncharted waters using state-of-the-art forward scanning sonar. Technology and experience will be put to the test on next summer's transit of the Northwest Passage. <For information click www.expeditions.com>