In the flooded forests of the Amazon reflections are everywhere. Blackwater tributaries and oxbow lakes lead us deeper into the largest tropical rainforest on Earth. Floating quietly in the skiffs with outboard engines off, we listen to the sounds – the boisterous calls of macaws in the far distance, constant chatter of parrots and parakeets in the top of a nearby tree, the high-pitched squeaks of squirrel monkeys.

Reflecting back on my experience exploring the Marañon and Ucayali Rivers aboard the Delfin II, I will be forever changed by the experience. We've watched amazing birds from horned screamers with their crazy donkey-like calls, to  the hoatzins with their punked-out head feathers. We've had great looks at monkeys of many varieties, including the secretive owl monkeys and the curious Monks Sakis, with their tropical fur coat. The Pacaya-Samiria National Reserve is the largest protected area in Peru, and in addition the great birding in a pristine wetland, it's one of the best places to see both pink and gray river dolphins. And we saw them on a daily basis.

Looking down on the meander bends and the arcing oxbow lakes from 35,000 feet on my way back to Lima, no longer is the Amazon Basin a blank spot on the map. The concept of scale still challenges the imagination—a flood plain stretching from Maine to Colorado, and covering an area almost the size of the continental Untied States, with a river system extending over 4,000 miles from the Andes to the Atlantic Ocean. During the rainy season, heavy rains from November into June flood the Amazon River Basin. Incredible as it may seem, the volume of water is 10 times greater than the flow of the mighty Mississippi River, representing more than 15% of the freshwater flowing into the oceans from all the rivers in the world. In fact, a plume of freshwater extends 200 miles offshore into the Atlantic Ocean.

As water levels rise, the river and its thousands of tributaries are no longer confined to their channels, flooding the forest and also many of the villages along the river banks. A family in a dugout canoe hides in the shade, their village flooded with nowhere to walk. Their culture is rich in tradition handed down through the generations. The river and forest provides everything they need. They eat fresh fish daily, fruit of the season, and breathe some of the cleanest air on the planet. Plants provide their medicine. A man and his family fish using a spear. The waters are still rising, and will be for the next couple of months. Imagine, being flooded each year and welcoming the water.

There is something to discover around every bend, and the forest has one last surprise for us. Leaping between the branches is the sleek and rarely seen tayra, a small omnivorous mammal in the weasel family. Trying to get an image of this swift moving creature is one last reminder of the challenges of photography in the rain forest—set your ISO at 1600 or higher, use a single point focus to get beyond leaves and branches in the foreground, and over-expose when shooting against the bright sky. Easier said than done when in the moment.

As we head back to the Delfin II in the skiffs after dark, we keep looking and secretly hoping for a glimpse of the jaguar. We all know there is still so much more to discover.

Leaving the wildness of the Amazon will no doubt require time to adjust back to our world of Amazon.com, Whole Foods, and fast cars crossing dry land. Re-entry will come with gratitude for all we have and enjoy in the modern world, but I will miss the sounds the most. 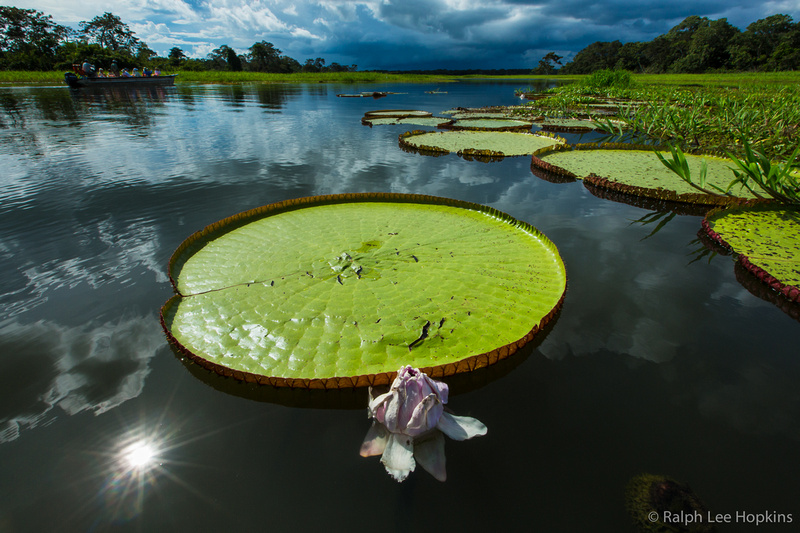